Cheap idea for a romantic night out in Las Vegas... a discounted Strip Helicopter night flight tour for just $79!

In Las Vegas and wondering where to take that special someone for a fun and romantic night out while on a budget? Hey, in Las Vegas it's Valentine's Day 24/7 and you don't have to be a millionaire to be treated like a VIP on this discount priced Las Vegas Strip Helicopter Night Flight!

Here's an affordable and romantic idea on what to do with your special someone while in Las Vegas! An exciting helicopter flight over the neon lights of the Las Vegas Strip is one of the best ways to experience everything there is to see across the world-famous Las Vegas Strip... these tours are also a great setting for popping the "BIG" question!

Make your way by car, Uber or Lyft to the Papillon Grand Canyon Helicopters VIP air terminal conveniently located just minutes from the Las Vegas Strip. Then relax in the pre-flight lounge before you board your luxurious jet helicopter. You will then rise above the City of Lights and see spectacular views of the dazzling Las Vegas Strip! Cruise past famous landmarks such as the Mandalay Bay, Excalibur, MGM Grand, New York–New York, the Sky Beam of the Luxor Pyramid, Aria at CityCenter, the Raiders' stadium, the new Resorts World, the High Roller ferris wheel at the LINQ, Mirage, Treasure Island, Planet Hollywood, the water fountains of the Bellagio, the Eiffel Tower at Paris, St. Mark's Square at The Venetian, Caesars Palace, Wynn and Encore, make a hairpin turn around the massive Stratosphere Tower and Skypod rising 1,149 feet into the air. Your helicopters’s return to the air terminal provides the same breathtaking views of the Las Vegas Strip in reverse order. 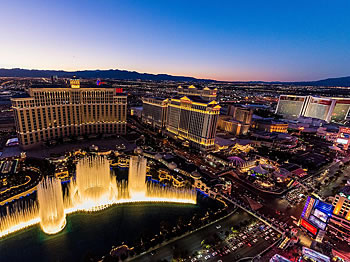 The perfect way to see the Grand Canyon, great for couples or a family vacation getaway! This ultimate 3-in-1 airplane, helicopter and boat cruise Grand Voyager Rim-to-River combo tour takes you to the Hualapai Indian Nation at the West Rim of the Grand Canyon. This exciting tour provides one of the most comprehensive Grand Canyon experiences available, at a great value price straight from the tour operator... add on Grand Canyon Skywalk admission is also available! CLICK FOR INFO...

We only feature the best tours from Papillon Grand Canyon Helicopters and Maverick Helicopters, two of the world's largest and most experienced helicopter tour operators, to ensure that you get the best prices and service.

Most Helicopter tours departing from both Las Vegas and Boulder City heliports include convenient round-trip shuttle service to and from most all major Las Vegas area hotels and resorts.

Best Prices on the Best Tours

Book your tour with peace of mind, all Papillon tours include a Best Rate Guarantee. CLICK FOR INFO...

Choosing your Grand Canyon or Las Vegas Tour Operator is important. Rest assured that HeliGrandCanyon.com features only the best Grand Canyon and Las Vegas Helicopter tours from only the largest and most reputable sightseeing tour operators.

We proudly feature tours from two of the world's largest and most experienced helicopter tour operators, both with excellent safety records, Papillon Grand Canyon Helicopters and Maverick Helicopters.

Due to the size of these companies’ passenger volumes, they are able to provide you with the very best value and very best level of service, making your Grand Canyon Helicopter Tour or Las Vegas Strip Helicopter Night Flight both memorable and affordable.